Black In The Oval Office, Africa Don't Celebrate Yet 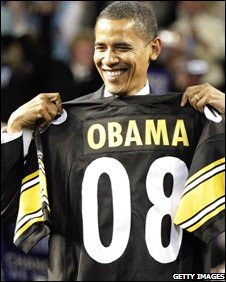 Mr Obama proposes to invest $150bn in alternative fuel over the next 10 years, he said the US would not be held "hostage to dwindling resources, hostile regimes, and a warming planet”. He called for greater fuel efficiency and an "energy economy" aimed at creating millions of jobs for Americans.

"We (the US Government )will commit ourselves to steady, focused, pragmatic pursuit of an America that is freed from our energy dependence, and empowered by a new energy economy that puts millions of our citizens to work".

Read and read it well Nigerian government, policy makers and anyone who cares, the hand writing is on the wall, since successive government in Nigeria have only payed lip service to creating an economy for Nigeria that is diversified and not heavily reliant on oil, I guess this is a wakeup call.

If the major buyer of your product say he see a future of less dependence on not just you as a supplier, but also on the product you sell in the market, be very sure there is trouble knocking on your door, because sooner or later other buyers will follow suit, especially if your so called major buyer is successful in the venture he proposes.

The Niger Delta issue is well heard and yet not solved, I want to believe that the crude oil coming out of the Niger delta will not fall under the category of what President Obama will describe as hostile regimes,but i find that hard because not that this phrase has anything to do with the US - Nigeria relations, but with the hostility going on in the oil rich region, It’s my guess that Nigerian crude oil will fall under the category of crude oil from a hostile regimes. You won’t blame him, it’s his watch and his most important task it centred on the American people, hence the move to secure their future by the best means possible.

The Good book says “ he that has an ear let him hear” , permit me to say also, He that has brains, let him use it. Nigeria wake up and smell the coffee.
Email Post
Labels: changeover gearing up

SOLOMONSYDELLE said…
Yes, the Obama plan for energy independence could prove problematic for oil producers like Nigeria. However, the reality is that Nigerian oil and oil from the Gulf of Guinea is technically the best option for the US. The countries in that region are pro-America and Russia is working very hard to control the movement of oil there thus giving the US an incentive to 'get in' first.

Nevertheless, all Nigerians need to challenge their leadership to speed up the pace of diversifying the economy and improving the nation's infrastructure, despite the current global recession. That is one of the only ways that Nigeria will come out of the recession in a competitive position.

Sele Akobo(curvyice) said…
I am so agreeing with you Ogle and Solomonsydelle as well..It is hightime for the NIgerian Leaders to pick up speed in the diversification of our economy. We as a people have land that is condusive for crops...they should use it. How about Nigerians with our knowhow develop a manufacturing industry and become an exporter as well istead of just been importers. How about boosting the service aspect of our Nation hence creating jobs and increasing our GDPs with that.....I think this is truly an era of change and Nigerians had better not be left behind.
2/13/2009 3:01 AM