Its A Matter of Cash 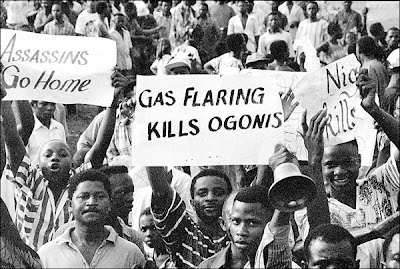 On the 20th of Jan 2009, i watched on as million and millions of Americans all celebrated one thing HOPE!, and change that lies in horizon, and from my room I wondered will our home land Nigeria ever have something to celebrate about, even if its just change, a change in the right direction.

Below is an article written in response to CNN's NIGER DELTA, Planet in Peril,  by a friend of mine, Comfort Olubo Umaru a lawyer based in Abuja Nigeria.

IT’S A MATTER OF CASH. by Comfort Olubo Umaru

As an avid reader, a former resident of the area and concerned citizen, it would be remiss of me not to start any discussion on the Nigerian Niger Delta with one name. Kenule Saro Wiwa.
As a child my favorite TV show was Bassey and Co. This was a screen adaptation of plays written by Ken Saro Wiwa. It was about a wise cracking young man called Bassey and his friend Alale and their varied antics. The show was all about their varied attempts to evade their landlady, a formidable character called Madam the Madam.

Madam the Madam was well known for her catch phrase. Whenever someone called her name, she would respond; “it’s a matter of cash” and sometimes “cash is power”
The man died

Unless you live under a rock in Nigeria, the tragic tale of Ken Saro Wiwa and the Ogoni leaders is a well known one. As a former resident of the area, I quickly realized that the Ogoni’s despite being the people who’s lands produced a huge chunk of Nigeria’s revenue were the least educated. They were the security guards, cooks, gardeners cleaners and ‘odd job jack’ to the rich.

So he (Saro Wiwa) got talking, and they (the people) started thinking. Not good for the then military government. The only way they handle resistance… Kill them all.
Several sanctions, embargoes and boycotts later, the situation has only gotten worse.
To properly address the Niger Delta issues and problems, I have to use a popular cliché. Follow the Money!

Law and effect
Under the Petroleum Act, Oil and Pipelines Act and other available legislation on Oil in Nigeria, All minerals belong to the Federal Government of Nigeria. It does not matters if it’s your residence, ancestral, sacred or burial ground. If there’s oil underneath. It not yours. It’s for the Federal Government. If you lose your land due to oil explorations, you may claim compensations. However where money is concerned, the land all of a sudden has several owners waiting to be paid.

The paying authorities cashes in on this and the compensation money is lost in bureaucratic and corrupt process.

Oil money runs the country.
The Federal Government of Nigeria will do everything to protect the goose that lays this eggs.
Everyone comes here to become rich, I still live in squalor. Where’s my share? It’s not the wrong thing to say. How do we get what we all know should in any circumstance should be ours?
I know! Like every civilized society we’ll send representatives. Talk with the government and talk with the multinational companies operating here. Well they returned. They told us they got nothing but they look richer.

Look at the mess they’ve made. The gas flaring has ensured that we can’t even drink rain water. The waterways are polluted and nothing grows after the last spillage.
The roads are bad. The solution to this, buy helicopters. If you fly over the problem, you don’t see it. If you don’t see, it won’t bug you. If it doesn’t bug you, you don’t have to do anything about it.

The money trail.
The Federal Government gets all the cash after the multinational has taken their huge chunk. The appropriate order is to pay to the states and local governments from the federal account. And there the money ends. A few months as a government official in any of the Niger Delta states and you’re made for life.
The states sued the federal government. Resource Control they shouted. Well, in the court room we were declared winners. What happened to the allocation sent in, what was done with? How come I still don’t see or feel the effect of this victory?
We only saw the foreign bank balance of our governors, their wives, kids and other relations grow.

And so we fight. The rise and rise of militant groups. That’s how to MEND it.
Last year, on national dailies the top government regulatory body on petroleum matters admitted to spending millions of dollars paying off militant groups to “keep the peace” Well, no one’s admitted to getting the money.
Do they take our protest serious? No. They know that once we make enough noise and we’re paid off, there ends the struggle. What about the environment? Who cares.
The last freedom fighter was on a glossy magazine. Beautiful house, lovely bride and what a car!
If we kidnap some of those white guys maybe they’ll pay attention. If we shut down a few plants and blow up stuff, the government will do something.
They did. Send in the army. Shoot first ask questions later.
The foreign media needs a story. We supply enough.

Solutions?
How do you change the mind? I’ve seen money thrown around. Don’t tell me there’s more to life than money because there nothing else to this place than oil money. Should the Federal government walk down the street handing out money to every citizen? The bad examples have been set. The past military regime and the immediate past regime compounded it. They have created a situation whereby the multinational companies can be as irresponsible in their practices as much as they want. As long as they keep the money coming.

The former resident
In the late eighties and early nineties, I lived with my parents in Port Harcourt the biggest city in the Niger Delta.
It was and still is one city I can’t afford to live in anymore.
It’s so expensive. You could never haggle prices with traders in the market. There’s always someone willing to buy at the inflated rates. How could we compete on civil service pay scheme as poor as it was then and still is till today?
It was the first city I lived in(and I’ve lived in a lot of them) that I had to walk a distance to get fresh water at a public tap suitable for cooking.
I once had to run out of my home with the other members of my family because one of the helicopters belonging to one of the multinational companies was going to crash into our home. Only my father was wise enough to have his pen and cheque book in hand. The rest of us had only the clothes on our backs. We were lucky, it went else where to crash, we would have made the news.

Port Harcourt the largest city in the Niger Delta lacks what other state capitals in the country have. The average state capital in Nigeria can’t compare to most cities in the world in terms of infrastructure. Now to think Port Harcourt is way below average. The rural areas will then be described and depicted as the hell holes that they are. An area that has produced multibillions of dollars in oil revenue that still looks the way it does is a hell hole where innocents have been condemned to by evil and greedy leaders.

Now back to where I began
To a much admired writer, who fought and lost his life to the cause,
To my friend Wilson who’s upset about the way his home is portrayed,
To anyone who bother’s to read this,
Should I say that it’s ironic that all the problems in the Nigerian Niger Delta has been reduced to a catch phrase in a book written by Ken Saro Wiwa himself.
Wilson, sorry to say, IT’S A MATTER OF CASH.

Unknown said…
I totally forgot about this. I would love to edit and re release this if you don't mind. Been a while Wilson.

Ogle said…
Great to hear from you comfort, absolutely you can sure edit this and I will repost the updated version. Yes been a long while, trust you and yours all doing well. Cheers
7/07/2017 9:08 AM