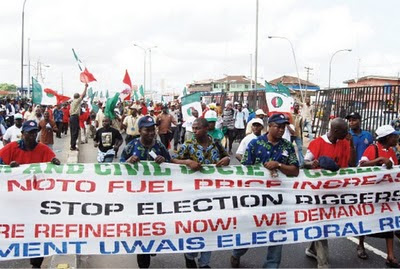 Just like a flash 2011 fast approaching and its election year in Nigeria. Using this quote by one of my favourite author (Chimamanda Adichie) one can easily say a “Normalised Political Fear Invades Our Life’s” as Nigerians again.

The air of uncertainty and fear keeps building by the day, the Nigeria daily newspapers are littered with headlines and captions that makes one wonder, What really will 2011 elections bring with it, or what will it take away.

Will it bring the desired changes that Nigerians so much yearn for since it started it’s ever so called nascent democracy ? or will it take more life’s via assassinations / violence, increased kidnapping and possibly magnify corruption to greater heights.

Though the majority of Nigerians fails to talk about it, either out of hopelessness or nonchalance, but will rather be fanatically engaged in the discus of the English Premier League. The truth remains that consciously or sub consciously, normalised political fear has and is invading our life’s.

Let’s get talking, create awareness and open our minds. The mind of the average man, woman boy or girl child in Nigeria to demand and fight for honest and purposeful governance, rather than let this “fear” envelope our minds.

50 years is a rather long time in such a mess, we really should not be celebrating Nigerian at 50, but rather be asking serious questions at 50 so that hopefully within the next 50, will find some real workable answers.
Email Post
Labels: Our issues