Two weddings and the Jets

Early yesterday morning 28th December, I saw a rather strange sight, well over 70 people and counting, crowded at a check-in counter for a Maiduguri bound flight at the Abuja, Nnamdi Azikiwe International Airport(Domestic Terminal ) Wing -D.

Most of the men were dressed up in very nice looking flowing Agbada, and "rocking" the usual bama hats, the traditional cap, typically worn in the Northern parts of Nigeria but which has gained strong national appeal in recent years.

One thing was for sure, this group of travelers every single one male and female we're "decked out"putting on very nice traditional attires, but oddly enough I noticed none of these folks had any baggage that needs to be checked-in.

What an odd set of travelers I thought, could they be going for hajj or something, I don't think so, cause some of them had on traditional attires from Southern and Western Nigerian, and besides why will they all be dressed up with no luggage. I reckon this would not be the most appropriate way to dress for a sojourn to a holy land. All the same, Mecca or not these folks are all going somewhere special and from the looks of how nicely dressed they all look, I can bet these lots are going to, excuse the expression - get " their groove on".

My own check-in counter was not crowded, so I had all the time on my hands to "CNN" on these beautiful folks and get "on the spot reporting". I checked in stress-free and went through security "easy like Sunday morning ".

Miraculously no delay on our flight, it's departing on time, this time. Am a window seat traveler, If I can help it, I ensure I get a seat by the window and on the mid winged section - since aeronautical engineers, tells us folks seated in this section experience the turbulence a bit less, compared to the folks at the back of the plane, even though statistically, the back of the plane tends to be the safest.

Anyways back to my story, as our plane taxied for taking off, am looking out the window, I see another unusual sight, three glinting private luxurious jets all lined up on the taxiway, one after the other for take off, private jets land and take off all the time, but to see three lined up like a convoy, my inner thoughts we're, hmmm, Nigerians still living the " lifestyles of the rich and famous". If Robin Leach, was still alive, I think, he  should have probably resurrected the television series  Lifestyles of the Rich and Famous which ended in 1995, just to show the world how these Nigerians are now "living it up".

Much later in the day, home safe and sound, It all made sense, as I read the news, the dots connected of what I saw at the Airport in Abuja.The crowd of decked out party looking goer passengers at  Max Air check in counter for flights heading to Maiduguri and the three private jets taking off.

These no doubt  we're en route to Maiduguri for a Wedding ceremony . The wedding of two of the Children of the Group Managing Director (GMD) of Nigeria National Petroleum Corporation, (NNPC).

Some news dailies today reported about 43 aircraft of various sizes, mostly chartered, landed at the Maiduguri Airport, however the Twitter "mob" said over 70 private jets ,😆 LOL. 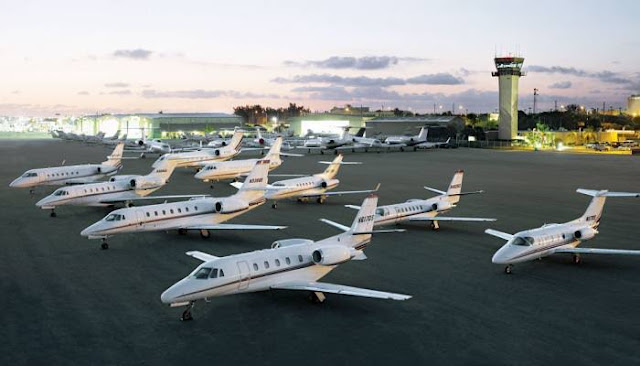 No wonder the government of the day,wants to gag these "mobs" and every other Nigerian on social media so bad,  via the (The Social Media Bill), officially titled “Protection from Internet Falsehoods and Manipulations and Other Related Matters Bill 2019″. 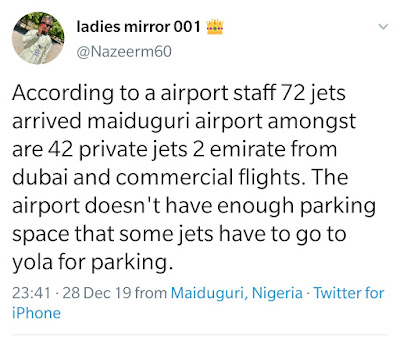 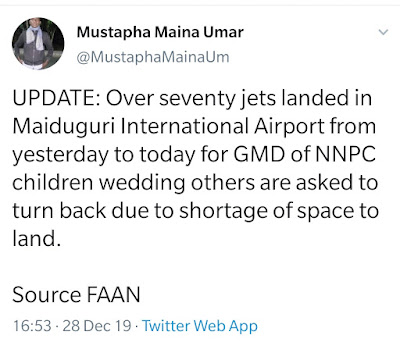 Good or Bad,social media now seems to be that one "raging bull" , this government wants to either get back in a cage or kill it all together , I will probably not be able to post stuff like these one on Facebook when this bill sails through and come into effect,so let me still "free speech " while I can, better be safe than sorry.

To the young man , and the young lady who just got married to their partners -I say congratulations - your Dad must be doing or must have done something very right to have all these well wishers from far show up at the wedding of his Children all the away in Maiduguri.

Even for me, seeing the jets at the Abuja airport and the crowd of travelling guest, this was enough "glitz wave"  and it caught my attention well enough to now write about it.

As for the interpretation how this event is once again  an "ostentatious display of affluence and wealth in a debt burden and yet still  $30B loan seeking Nigeria ".

Let me leave that for the the good folks on  social media, the govt supporters, the govt critics,or the "mob" depending were you are on these divide, you can spin it how you seem fit.